Song debuted in the entertainment industry in 1996 when she won the Grand Prize in SunKyung Smart (a school uniform company) when she was finishing her third year in junior high school. It was not long until she starred in her first drama, Happy Morning. Since then, she would continue to star in a string of various dramas and sitcoms but it wasn't until the KBS drama Autumn in My Heart in 2000 with Song Seung-hun and Won Bin that she rose to fame throughout Asia.
In 2003, her popularity continued to climb when she played a leading role in the poker drama All In, alongside Lee Byung-hun. The following year, she costarred with singer Rain in the successful romantic comedy series Full House.

After the pan-Asian success of Full House, she starred in the film My Girl and I, which was panned by audiences and critics alike. She then went on a 2-year hiatus, returning to acting as the kisaeng Hwang Jin-i in the film adaptation of Hwang Jin-i, which was released in South Korea in 2007. She then made her American debut in the Hollywood indie film Fetish in 2008. In late 2008, Song starred in the KBS2 drama The World That They Live In opposite Hyun Bin.
Her latest film La Quotidienne will be released in late 2011. It is about a documentary producer who loses her fiancé.
Song is considered Korea's "Most Beautiful Woman" and has been chosen by many Korean male celebrities as the "Korean Goddess of Beauty". In 2010 she was ranked #18 in The Annual Independent Critics List of the 100 Most Beautiful Faces.

Aside from dramas and films, Song is one of the most in-demand product endorsers in Korea and has done many TV commercials and print ads over the years. She has been a spokesperson for popular brands such as Laneige, Levi's (Lady style), Etude, Whitea, Aritaum, Innisfree, Nintendo DS (Animal Crossing), Roem, McDonalds (Ice Cream), FHM and Vivien (Bra).

When Song was born, she was sick and her parents and doctor thought she would never make it. Miraculously she survived and her parents only registered her birth on February 26, 1982. Her talents are ice skating, swimming, and playing the piano.
Song has been in highly publicized relationships with two of her leading men. She started dating Lee Byung-hun while filming All In in 2003. Their relationship and subsequent break-up in 2004 generated much media attention and unconfirmed rumors. Song kept in touch with Hyun Bin after The World That They Live In ended, but it was their separation while Hyun was filming Friend, Our Legend in Busan that made them realize they were in love. They started dating in June 2009. Hours after Hyun Bin's military enlistment, his and Song's agencies confirmed speculation that they had broken up in early 2011. It is believed that they purposely scheduled the announcement to keep the public's focus on the stars' respective projects rather than the relationship, and so that the break-up would not overshadow Hyun's army send-off. 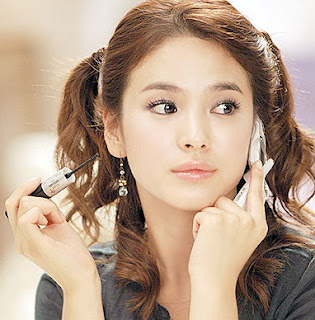 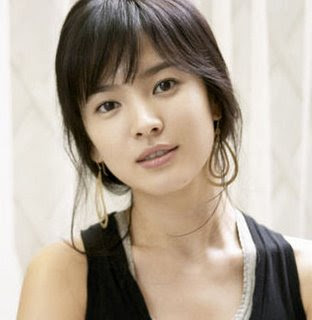