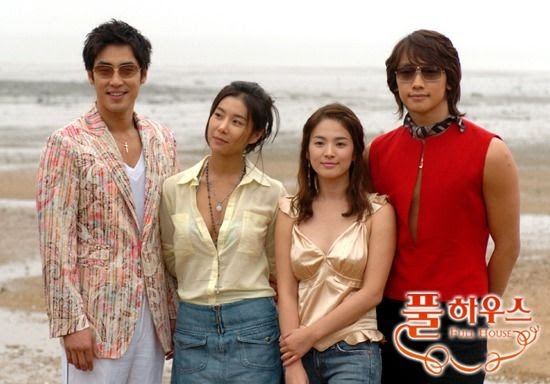 Full House (풀하우스, Pul-hauseu) is a 16-episode South Korean television drama series broadcast by KBS in 2004. It is a romantic comedy based on the manhwa of the same name, written by Woon Soo-yoon and stars Song Hye-kyo and singer Rain.
It was a huge success and became one of the main reasons for the expansion of South Korean culture known as the Korean wave.

Han Ji-eun (Song Hye-kyo) lives in a house called Full House built by her father and is an aspiring script writer. One day her two best friends for money reasons trick her into believing she has won a free vacation, and while she is gone they sell her house. On the plane she meets Lee Young-jae (Rain), a famous actor. Through comedic events they get acquainted during her vacation and when she returns she discovers her house has been sold to him.

Though they don't get along with each other as she is messy and he has a bad temper and likes cleanliness, they agree to live with each other. At first Ji-eun works as his maid in order to buy her house back, but later because of Young-jae's wish to make the love of his life Kang Hye-won (Han Eun Jung) jealous, they get married. They set up a contract for the marriage to last six months. During that time complications arise and Ji-Eun and Young-Jae become attracted to each other. Also, Ji-Eun starts to feel a strong bond with Young-jae's family.

However Young-jae's bad temper along with the romantic attentions of Yoo Min-hyuk (Kim Sung Soo), Ji-eun's handsome and friendly publisher, starts to create a rift between the couple. So does Hye-Won, who starts to feel jealous when she sees Young-Jae and Ji-eun getting close. Eventually, Young-jae and Ji-eun get a divorce and he moves away.
When he returns he realizes that Ji-eun hasn't married yet and knows that he has fallen in love with her - and she with him. He proposes to her, this time for the right reasons, and finally they get married for a second time. 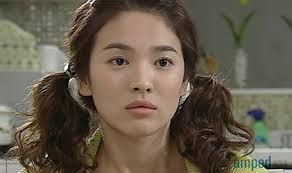 Ji-Eun is an optimistic and cheerful girl, loyal to her friends. Though naive and not very smart, she is shown as a character with spunk and a good heart as displayed in her efforts to be a writer. She lives in a beautiful home named Full House , which she inherited from her late parents. Her best friends are Hee Jin and Lee Dong Wook. 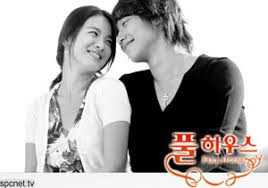 Young-jae is a popular Korean actor, especially around girls. Though appearing to be egotistical and stubborn, mostly to maintain his pride, he has secret unrequited feelings for his childhood friend, Hye-Won. But later on, Young-jae fell for Ji-Eun He also has a fragile relationship with his father, who is a doctor. Young-Jae also had a sister who died as a child. Though he can be selfish, he cares deeply for his friends.

Hye-won is a close family friend of Lee Young-Jae, knowing them since childhood. Working as a fashion designer, she also designs most of Young-jae’s clothes. With her rich family and attractive appearance, she is accustomed to attention from men, but has ever only loved Yoo Min-Hyuk. 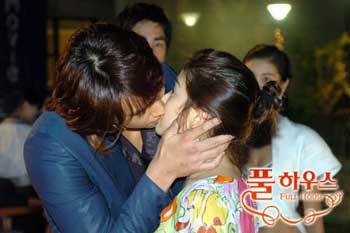 Min-hyuk is a ladies' man. He is smart, skillful and respected, but remains detached from most people because of his busy lifestyle. He is also close friends with Young-Jae, who confides in him his feelings for Hye-Won. Min-Hyuk is a director of a large media company. Like Hye-Won, he is attractive and used to attention from women.