Megan Denise Fox (born May 16, 1986) is an American actress and model. She began her acting career in 2001 with several minor television and film roles, and played a recurring role on Hope & Faith. In 2004, she launched her film career with a role in Confessions of a Teenage Drama Queen.

In 2007, she was cast as Mikaela Banes, the love interest of Shia LaBeouf's character, in the blockbuster film Transformers, which became her breakout role. Fox reprised her role in the 2009 sequel, Transformers: Revenge of the Fallen. Later in 2009, she starred as the titular lead character in the film Jennifer's Body. Fox is considered a sex symbol and frequently appears on men's magazine "Hot" lists, including Maxim and FHM. In 2004, she began dating Brian Austin Green, of Beverly Hills, 90210 fame, after reportedly having met on the set of Hope & Faith. They were involved in an on-again, off-again relationship, before marrying in June 2010. 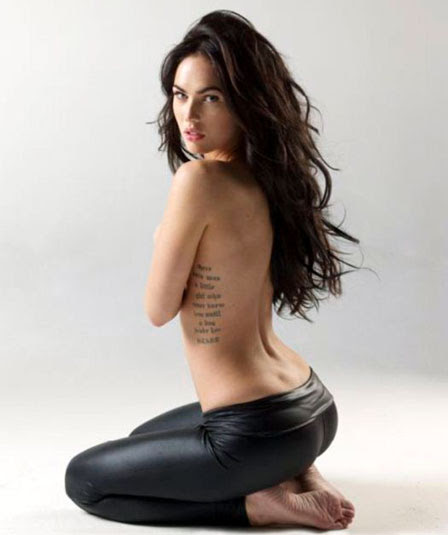 Fox is of Irish, French, and Native American ancestry, and was born in Oak Ridge, Tennessee to Darlene and Franklin Fox. She was raised Roman Catholic and attended Catholic school for 12 years.

Fox's parents divorced when she was young and she and her sister were raised by her mother and her stepfather, Tony Tonachio. She said that the two were "very strict" and that she was not allowed to have a boyfriend or invite friends to her house. She lived with her mother until she made enough money to support herself.

Fox began her training in drama and dance at age five, in Kingston, Tennessee. She attended a dance class at the community center there and was involved in Kingston Elementary School's chorus and the Kingston Clippers swim team. At 10 years of age, after moving to St. Petersburg, Florida, Fox continued her training.

When she was 13 years old, Fox began modeling after winning several awards at the 1999 American Modeling and Talent Convention in Hilton Head, South Carolina. At age 17, she tested out of school via correspondence in order to move to Los Angeles.
Fox has spoken extensively of her time in education; that in middle school she was bullied and picked on and she ate lunch in the bathroom to avoid being "pelted with ketchup packets". She said that the problem was not her looks, but that she had "always gotten along better with boys" and that "rubbed some people the wrong way". Fox also said of high school that she was never popular and that "everyone hated me, and I was a total outcast, my friends were always guys, I have a very aggressive personality, and girls didn’t like me for that. I’ve had only one great girlfriend my whole life". In the same interview, she mentions that she hated school and has never been "a big believer in formal education" and that "the education I was getting seemed irrelevant. So, I was sort of checked out on that part of it".
Posted by sella ashfaq at 4:17 PM