Good news for Terminator fans: First it was confirmed earlier this weekend that The Sarah Connor Chronicles has been renewed for a second season. Second, the rumor from last week that Terminator 4 had been shut down has turned out to be untrue after all. And now THR reports that Moon Bloodgood is in final negotiations for the female lead in McG’s upcoming film.

Bloodgood will play a “no-nonsense and battle-hardened member of the resistance who is carrying a lot of guilt over surviving the nuclear holocaust.” You might remember Bloodgood from her role as Livia in NBC’s short-lived television series Journeyman. Principal photography is set to begin in two weeks, on May 5th, with the film set to hit theaters on May 22nd 2009. 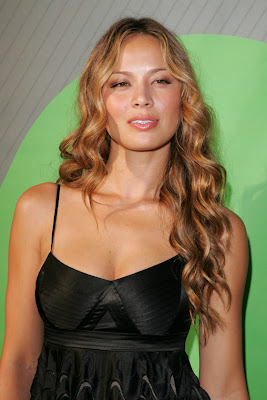 What's happened to all the great movie nudity lately? Billy Crudup started the year off with a bang, so to speak, with his big blue penis in Watchmen, and Marcus Nispel's Friday the 13th reboot featured sweaty sex and generous amounts of naked female flesh, but the summer and fall seasons have been curiosly bereft of talked-about sex scenes or body parts. Jessica Biel's bravely-bared breasts and backside in Powder Blue went direct to video, Hayden Panetierre nonchalantly limited her exposure to 'side boobage' in I Love You, Beth Cooper, and Megan Fox decided to keep her nipples to herself in the proudly feminist relationship drama ('cause it sure wasn't horror) Jennifer's Body.
In my youth, movies educated me about the wonderful diversity of naked bodies. Today, television and the Internet have stolen much of the thunder once claimed exclusively by the theatrical experience. (Case in point: Susan Sarandon's daughter, Eva Amurri, just made a big splash by going topless in Californication.) No wonder Terminator: Salvation director McG teased the audience at WonderCon earlier this year, bringing actress Moon Bloodgood up on stage and asking: "Who wants to see Moon's boobs in the picture?" She later said: "I'm a woman, I have boobs, it's a beautiful shot." As anyone who saw the movie in a theater knows, though, her toplessness was cut, reportedly as part of Warner Bros.' effort to secure a PG-13 rating.

The unrated director's cut is due out on DVD and Blu-ray on December 1, and the deleted scene has, apparently, hit the Internet (watch it after the jump). The verdict?