After three years of intensive training with Wu Bin, Li won his first national championship for the Beijing Wushu Team. After retiring from wushu at age 17, he went on to win great acclaim in China as an actor making his debut with the film Shaolin Temple (1982). He went on to star in many critically acclaimed martial arts epic films, most notably the Once Upon A Time In China series, in which he portrayed folk hero Wong Fei-hung.

Li's first role in a Hollywood film was as a villain in Lethal Weapon 4 (1998), but his first Hollywood film leading role was in Romeo Must Die (2000). He has gone on to star in many Hollywood action films, most recently co-starring in The Expendables (2010) with Sylvester Stallone, in The Forbidden Kingdom (2008) with Jackie Chan, and as the title character villain in The Mummy: Tomb Of The Dragon Emperor (2008) opposite Brendan Fraser. He also appeared in the Hong Kong film Ocean Heaven (2010), directed and written by Xue Xiaolu.

Li Lianjie was born in Beijing, People's Republic of China, the youngest of two boys and two girls. His father died when he was two years old, leaving the family struggling.

Li was eight when his talent for wushu was noticed at a summer course at school, and he began his practice there. Li participated in the sport of wushu in the non-sparring event. He began his wushu on the Beijing Wushu Team, an athletic group organized to perform martial arts forms during the All China Games. He was coached by renowned wushu coaches Li Junfeng and Wu Bin, who made extra efforts to help the talented boy develop. Wu Bin even bought food for Li's family because they could not afford to buy meat, which was essential for the good physical condition of an athlete. As a member of the team, he received wushu training and went on to win fifteen gold medals and one silver medal in Chinese wushu championships, where, despite his young age, he competed against adults. According to Li, once, as a child, when the Chinese National Wushu Team went to perform for President Richard Nixon in the United States, he was asked by Nixon to be his personal bodyguard. Li replied, "I don't want to protect any individual. When I grow up, I want to defend my one billion Chinese countrymen!" which earned him much respect in his homeland.

Chinese films:
Jet Li's hand print and autograph at the Avenue of Stars in Hong Kong.

The fame gained by his sports winnings led to a career as a martial arts film star, beginning in mainland China and then continuing into Hong Kong. Li acquired his screen name in 1982 in the Philippines when a publicity company thought his real name was too hard to pronounce. They likened his career to an aircraft, which likewise "takes-off" as quickly, so they placed the name Jet Li on the movie posters. Soon everybody was calling him by this new name, which was also based on the nickname, "Jet," given to him as a young student, due to his speed and grace when training with the Beijing Wushu team. He made his debut with the 1982 film Shaolin Temple. Some of his more famous Chinese films include:

In 1998, he made his American film debut in Lethal Weapon 4 which also marked the first time he had ever played a villain in a film. He agreed to do Lethal Weapon 4 after the producer Joel Silver promised to give him the leading role in his next film, Romeo Must Die (2000) alongside late singer Aaliyah. The film became a box office hit.

Li turned down Chow Yun-fat's role in Crouching Tiger, Hidden Dragon (2000) because he promised his wife that he would not make any films during her pregnancy. He also turned down the role of Seraph in The Matrix trilogy, based on his belief that the role was not one which required his skills and that the films were iconic and stunning enough without adding his name to the cast list. 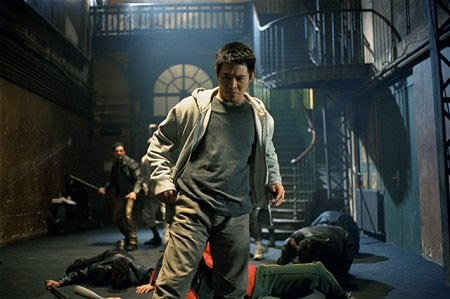 In 2001, he appeared in two more Hollywood films: The One which was the first of his films with Jason Statham and Kiss of the Dragon opposite Bridget Fonda which did moderately well at the box office. In July 2001, Li agreed to produce and star in an action film with Jackie Chan which was to be released in 2002 or 2003, but no further news of their collaboration surfaced until 2006. In 2002, the period martial arts epic film Hero was released in the Chinese market. This film was both a commercial and critical success and became the highest-grossing motion picture in Chinese film history at the time. In 2003 he reunited with producer Joel Silver for the action thriller film Cradle 2 The Grave where he starred alongside rapper DMX and fellow martial artist Mark Dacascos. In 2004, Li lent his likeness, voice and provided motion capture work for the video game Jet Li: Rise to Honor. 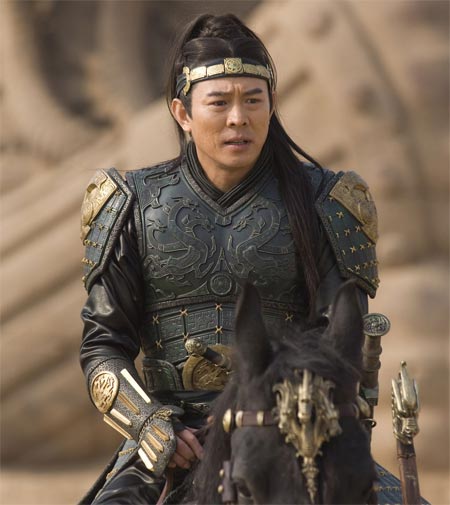 Li took on a more serious role in the 2005 film, Unleashed (a.k.a. Danny the Dog), where he portrayed an adult with the mentality of a child who has been raised like an animal. Although his martial arts skills were utilized extensively, it was a somber film with more depth than had been previously seen in Li's films, and co-starred dramatic actors Bob Hoskins and Morgan Freeman.

In 2006, the martial arts film epic Fearless, was released worldwide. Although he will continue to make martial arts films, Fearless is his last wushu epic. In Fearless, he played Huo Yuanjia, the real-life founder of Chin Woo Athletic Association, who reportedly defeated foreign boxers and Japanese martial artists in publicized events at a time when China's power was seen as eroding. Together with the film Fist of Legend, Li has portrayed both Chen Jun, the student and avenger of Huo Yuanjia (aka Fok Yun Gap), as well as Huo Yuanjia himself. Fearless was released on January 26, 2006 in Hong Kong, followed by a September 22, 2006 release in the United States where it reached second place in its first weekend.

I stepped into the martial arts movie market when I was only 16. I think I have proved my ability in this field and it won't make sense for me to continue for another five or 10 years. Huo Yuanjia is a conclusion to my life as a martial arts star
Posted by sella ashfaq at 11:13 AM