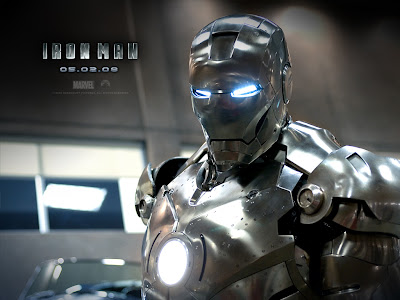 The film was in development since 1990 at Universal Studios, 20th Century Fox, and New Line Cinema, before Marvel Studios reacquired the rights in 2006. Marvel put the project in production as its first self-financed film. Favreau signed on as director, aiming for a naturalistic feel, and he chose to shoot the film primarily in California, rejecting the East Coast setting of the comics to differentiate the film from numerous superhero films set in New York City-esque environments. During filming, the actors were free to create their own dialogue because pre-production was focused on the story and action. Rubber and metal versions of the armors, created by Stan Winston's company, were mixed with computer-generated imagery to create the title character. Hasbro and Sega sold merchandise, and product placement deals were made with Audi, Burger King, LG and 7-Eleven.

Reviews were very positive, particularly praising Downey's performance. The American Film Institute selected the film as one of the ten best of the year. Downey, Favreau and Paltrow returned in the sequel Iron Man 2, released on May 7, 2010. Downey also made a cameo appearance as Stark in The Incredible Hulk and is scheduled to appear in the upcoming film The Avengers. The film is the first installment of the Marvel Cinematic Universe. 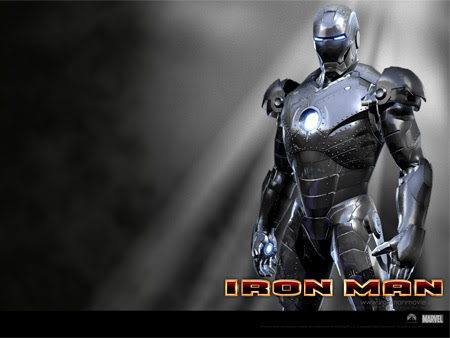 Tony Stark (Robert Downey, Jr.) is the head of Stark Industries, a major military contracting company he inherited from his father. Even though Stark is an inventive genius and wunderkind, he is also a playboy. One day, while his father's old partner, Obadiah Stane (Jeff Bridges), takes care of day-to-day operations, Stark flies to war-torn Afghanistan with his friend and military liaison, Lieutenant Colonel James Rhodes (Terrence Howard), for a demonstration of Stark's new weapon, the "Jericho" missile. However, Stark is critically wounded in an assault and finds himself the prisoner of an Afghan terrorist group known as the Ten Rings. An electromagnet has been embedded in his chest by fellow captive Dr. Yinsen (Shaun Toub) to keep shrapnel from killing him. The Ten Rings leader, Raza (Faran Tahir), offers Stark his freedom in exchange for building a Jericho missile for the group. Yinsen later confirms Stark's suspicion that Raza will not keep his word.

During his three months of captivity, Stark and Yinsen secretly build a suit of armor powered by a miniature arc reactor which Stark builds to power his electromagnet. The terrorists give Stark 24 hours to finish, but expires before the suit is fully activated. Yinsen distracts the guards while Stark powers up the suit. The now-armored Stark battles his way out of the caves and finds the dying Yinsen, who tells him not to waste his life. Stark burns the terrorists' munitions and flies away, only to crash in the desert. Stark survives the crash, but the prototype suit is destroyed. After being rescued by Rhodes, Stark announces that his company will no longer manufacture weapons. Stane advises Stark that this may ruin Stark Industries and his father's legacy.

Stark builds an improved version of his suit as well as a more powerful arc reactor for his chest. Later, during Stark's first public appearance after his return, reporter Christine Everhart (Leslie Bibb) informs him that Stark Industries weapons, including the "Jericho", were recently delivered to the Ten Rings and are being used to attack Yinsen's home village. He also learns that Stane is trying to succeed Stark. Enraged, Stark dons his new armor and flies to Afghanistan where he dispatches the Ten Rings. While flying home, Stark is shot at by two F-22 Raptor fighter jets. He tells Rhodes his secret identity in an attempt to get the attack called off, but flies off on his own.

Stark sends his assistant Virginia "Pepper" Potts (Gwyneth Paltrow) to hack into the company computer system. She discovers Stane has been supplying terrorists with Stark weaponry and hired the Ten Rings to kill Stark, but the group reneged on the deal upon discovering who the target was. Potts later meets with agent Phil Coulson (Clark Gregg) of the "Strategic Homeland Intervention, Enforcement and Logistics Division", a counter-terrorism agency, to inform him of Stane's activities.

Stane visits the Ten Rings and, after obtaining the pieces of the destroyed prototype suit, has the group eliminated. He then reverse engineers his own suit from Stark's first. However, his scientists can't duplicate Stark's arc reactor. Undeterred, Stane ambushes Stark in his house, uses a sonic device to paralyze him, and removes Stark's arc reactor. However, Stark manages to reinstall his original reactor. Meanwhile, Potts and several S.H.I.E.L.D. agents attempt to arrest Stane, but are attacked by him in his now functional suit.

Stark races to the rescue and fights Stane, but is quickly overpowered. He lures Stane atop the Stark Industries building and instructs Potts to overload the full-sized arc reactor in the building. This unleashes a massive electrical surge that knocks Stane unconscious and falls to his apparent death in the reactor. The next day, the press has dubbed Stark in his armor as "Iron Man". Since it was Stark fighting with Stane, Agent Coulson gives him a cover story. At a press conference, Stark starts to tell the cover story given to him by S.H.I.E.L.D., but then announces that he is Iron Man.

In a post-credits scene, S.H.I.E.L.D. Director Nick Fury (Samuel L. Jackson) visits Stark at home, and, noting that Iron Man is not "the only superhero in the world", says he wants to discuss the "Avenger Initiative".